Skip to content
Imagine their delight when the Friends of Pattemore House discovered a wood plane that once belonged to Maleny pioneer, Francis Dunlop (Jr) in a box of tools, kindly donated by Ron Hankinson, a Dunlop descendant (who married Judy, a Pattemore descendant.) Engraved with his name, Francis’ jointer plane is now proudly on display at Pattemore House because it demonstrates how such a simple yet vital tool was integral to building Maleny’s earliest homes. The Pattemore brothers Bill, Ernest, Albert and Stan, who built “Fairview” (Pattemore House) for their parents in 1907 from white beech, used a very similar tool daily whilst working at their saw pit. If you look closely at the photograph of the Pattemore’s camp here, you can see the plane being used on the pit-sawn boards that Fairview was constructed from.  A jointer plane was used to make a relatively smooth, uniform surface over the boards, producing one long, flat plane and one square edge. 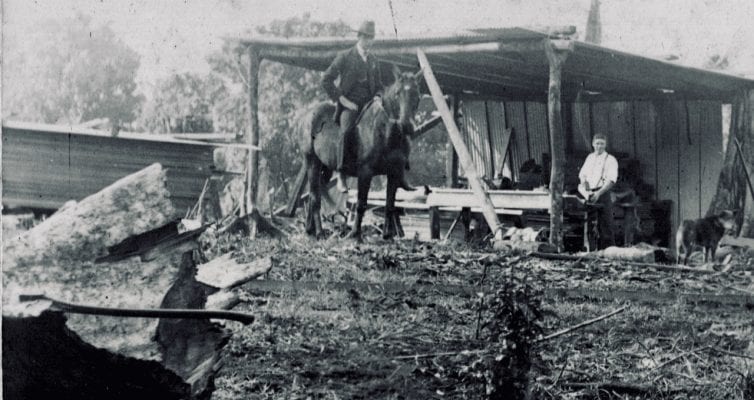 Born in 1858, Francis Dunlop, timber getter, selector, farmer and and butcher, was the eldest son of Francis Dunlop Sr and Jane Dunlop.

His mother Jane Dunlop was an early Maleny Bald Knob district pioneer, having moved to the area in August 1875 with her children, Jane (later Mrs Traill), William, Francis and Robert Dunlop. Jane Dunlop is buried alongside her great friend Margaret Hankinson, you can see their graves outside the Maleny primary school.
Francis Dunlop selected 160 acres (Portion no.1264) in Maleny on 9 March 1880 – his selection included the land where the Maleny hotel and primary school are now. On 29th October 1894 he started the Obi Obi Sawmilling Co on the site of the present day Energex Sub Station with his brother-in-law George Traill, J. Collins and William H. Lillingstone, which ran until 1930. In 1886 a giant section of a red cedar tree logged on his property was sent to London, to be exhibited in the Colonial & Indian Exhibition. It is said that the cedar stump was large enough for a horse and buggy to turn around on and that on arrival in England, when it was found that there were no saws large enough to cut the log,  it was blown up with explosives and the timber used to make alters and furniture in a well-known London cathedral. Francis also built a slaughtering yard near his home facing the Obi Obi Creek (today this site is the bottom oval of the primary school) establishing Maleny’s first butcher shop in 1898. These slaughter yards were still being used by Maleny butchers Bob MacKeny and Bert Saul in the 1950’s. Meat was transported by horse and cart up to the butcher shop at 11 Maple Street from Dunlop’s slaughter yards. Francis Dunlop was also the first treasurer of the Masonic Lodge in Maleny, that was originally named Dunlop Lodge in his honour in 1913.
Francis never married, living all his life in Maleny with his mother Jane, and was very fondly thought of by the locals who called him Uncle.  He died in 1941 aged 83 years, his body being cremated and his ashes spread on his mother’s grave.