Skip to content
The first school opened on the range was the Blackall Range Provisional School in 1886 and housed in a shed on one of Maleny’s early selector’s Mr Joseph McCarthy, on his property at Wootha. William Verrant was the first teacher at the school, enrolling twelve pupils. In 1937 classes had grown to 70 pupils, still with just one teacher but assisted by the older students who would mentor the younger children. It became known as the Wootha State School, closing in 1949 after operating successfully for 63 years and the building was later relocated and incorporated into the Palmwoods School. In 1898, Maleny North State School opened, with a very busy Mr Verrant now sharing his time between this new school and the original Blackall Range School. Maleny North school closed in 1914,  reopened in a new building in 1922, and finally closed in 1953 after 65 years. The Friends of Pattemore House share the story of the link between Maleny North State School and Dorothy Pattemore, the daughter of one of the Pattemore brothers, Bill, who built “Fairview” in 1907 for their parents, JR and Emily Pattemore. By 1909, Mr GP Slattery was the teacher at Maleny North State School, and he rode his horse (with dogs in tow!) across Reynold’s Crossing on the Obi to get to work. This crossing (now nearby a popular part of the Heritage Trail on the Maleny Precinct) emerged close to Gardners Lane, where brothers and farmers Bill and Albert Pattemore and their families were now sharing and living in the same small house. The Friends have a family account of the youthful and smartly dressed teacher, dropping by and picking Dorothy up on his way past, both of them sharing a ride to school on his horse, one of the main modes of transport for many school kids then. 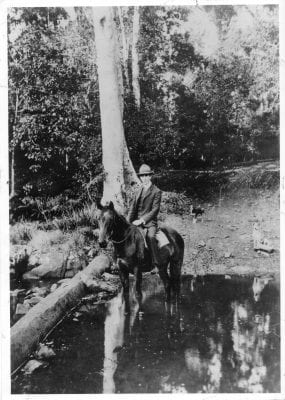 (Mr Slattery crossing Reynolds Crossing on his way to school)
As another interesting snippet, in 1907 Mr Joe Pollock built the Hotel Maleny on land purchased from Francis Dunlop, on the eastern banks of the Obi. When the North Maleny School closed in 1914, it was moved to the rear of the new hotel for use as a kitchen – talk about recycling.  Francis Dunlop also established the first butcher shop on the site of the present Maleny primary school.
photo at top: North Maleny School